Explore a diversity of landscapes and unique habitats in the Kalahari fringelands of Eastern Botswana.

Mashatu is a 31,000-hectare privately owned game reserve that lies within the Northern Tuli Game Reserve in the southeastern corner of Botswana. The name Mashatu refers to the endemic nyala berry trees, groves of which are found winding along the banks of the Majale and Limpopo rivers. Mashatu Game Reserve has diverse vegetation and landscapes, from undulating mopane veld and wide-open plains to riverine thickets and craggy sandstone hills.

The reserve is known for some of the best predator viewing in Botswana, with near daily sightings of lion, leopard and cheetah, as well as hyena, black-backed jackal and the African wildcat. It’s one of the few places where there’s a chance to see the rare brown hyena. There’s a full range of plains game, including giraffe, eland, zebra, the largest herds of elephant on private land in Africa, and about 350 different species of birds including the kori bustard.

Mashatu Game Reserve refer to the "Land of the Giants" as it is home to the African elephant, lion, giraffe, the baobab tree, the eland, ostrich and the kori bustard, but it's also a good venue to see little things on foot: to witness the intricacies of the wild animals of Africa, to learn about the hidden secrets of nature, to find the smaller creatures hidden in their bush homes and to see how the eco-system involves the inter-relatedness of species.

There is a good selection of luxury accommodation options in Mashatu, and all offer guided dawn walks as an alternative to a morning or afternoon game drive.

Mashatu Game Reserve is normally accessed via the Pont Drift border crossing, about six hours drive from Gauteng, but the crossing is temporarily closed under Covid-19 control measures. Instead, Martin's Drift is the nearest crossing point from South Africa, from where it about 3 hours to the reserve.

Walks are tuned to the conditions and guest wishes, and are usually around 3 hours in duration. They provide the perfect opportunity to get some exercise, while focusing on the smaller, and often most fascinating, creatures of Mashatu. Although many opportunities arise to view big game, the focus is on the little, often overlooked aspects of the bush - tracks, plants, insects, etc. 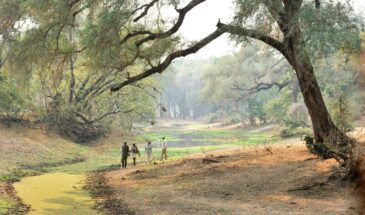 This pair of family-owned camps overlooking the Zambezi river are the perfect luxury walking bases in Lower Zambezi National Park. 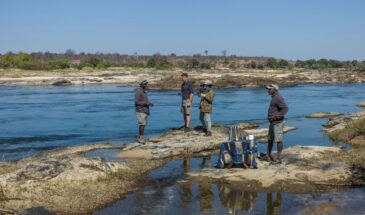 A popular base for visiting Mosi-oa-Tunya (Victoria Falls), Zambia’s smallest national park is the place to track white rhino on foot. 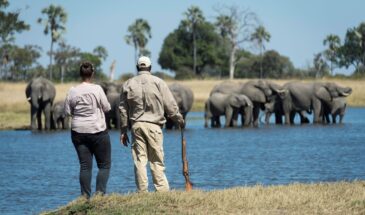 With three luxury camps in a private concession area in the east of Hwange, Wilderness Safaris is a great choice for walks in Zimbabwe’s largest park.