Mix walks from a seasonal camp and fly-camping during the northern Serengeti migration, when thousands of wildebeest cross the Mara river.

The Serengeti is one of the world's great wilderness areas, famous for its annual cycle of migration of vast numbers of plains wildlife. In the photogenic "Lamai Wedge" area, between the Mara river and Kenyan border, Alex Walker's Serian Lamai is the perfect walking base for exploring the northern Serengeti during the Mara river crossing season. It is set up less than 2km from the river near crossing point 4, with six comfortable tents set among acacias.

This walking safari itinerary offers five nights of adventurous fly-camping bookended by 2-night stays at Lamai camp, for a total of nine nights. The fly-camp has 4 stand-up bell tents, sleeping a maximum of 8, and walks are restricted to those aged 12 and over.

Lamai camp operates from June to November, matching the time of the influx of migratory wildlife. In the green season from December to May, when the large herds have migrated to the south,  there are walk-focused Serian mobile camp in that area - Serian's Serengeti South, Serian's Serengeti Mobile (Kusini) and fly-camping is also on offer.

The adventure begins with a scheduled flight to Lamai airstrip and a one hour game drive to the camp. Lamai camp is in a game-rich area close to the Mara River, and is the base for two nights with a mix of game drives and walks.

Then, the mobile safari begins, with five days of walking and nights of flycamping in the wilds. The area has an interesting topography of rolling savannah, boulder-strewn hillsides and fig-tree groves, and each morning is spent with your guide and traditionally attired and armed Hadzabe trackers. Camp is transported by vehicle, allowing guests to just walk with essentials - water, snacks and binoculars. By evening, enjoy fire-cooked meals and sounds of African wilderness under an endless starscape.

On Day 8, you will be back in the comforts of Lamai for a final two nights, with more walks and game drives. 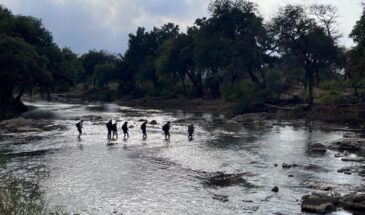 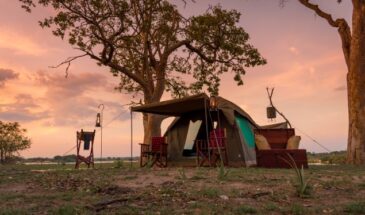 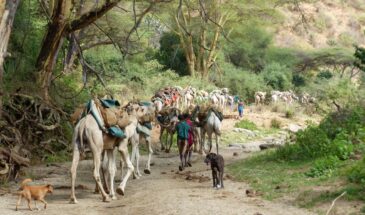 Journey in the splendid landscapes of Kenya’s northern frontier on a camel-supported walking adventure.